There is a killer lurking in your warehouse.  It takes the lives of as many as 85 people each year.  You may know it by one of its aliases, sit down, counterbalance, reach truck or cherry picker, but by any name, it is the power horse of many warehouses, the forklift.  Almost half of the fatalities were due to employees being crushed by the forklift tipping over and another 25% due to people crushed between the forklift and a hard place.  Now add in the nearly 35,000 serious injuries and 62,000 non-serious injuries caused when this tool is misused that creates downtime, lost money and further investigation into your warehouse operation.  So even with all of the latest electronic gadgets and safety devices on forklifts, the odds are still 1 in 10 forklifts will be involved in an accident in the U.S. this year.

WHY?  The biggest issue is human error.  Not paying attention or following the rules of the road.  One glaring example is the number of crushed deaths that could be so easily eliminated if drivers would use their seat belts.  Yes folks, just like in your car, the seat belt keeps you from being thrown from the tipping forklift and winding up underneath the 4-ton vehicle.  Yea.  I’ve heard it all before, it’s a pain in the butt to keep buckling and unbuckling ever time I have to get out.  SO WHAT!  I would rather you suffer that little inconvenience than having to watch your loved ones suffer because you died horribly.  The other issue is horseplay.  Nothing tarnishes a warehouses reputation more than grown men acting stupid with power equipment.  Allowing this behavior to go on, is not professional, it demonstrates to upper management you have no control and if someone was to be seriously injured, in California you could go to jail.  Early in my career, I wound up getting promoted because the previous supervisor wanted to be a nice guy and looked the other way when his favorites engaged in horseplay until the day of the accident and a young employee lost part of his foot.  Something he would have to live with for the rest of his life.  You, Mr. Supervisor, you work too hard to make your Quality Warehouse run as well as it does, don’t allow horseplay or the boys being boys, ruin it.

The testers.  There will be those employees who will test you.  If you are a new supervisor or new at your current warehouse you can set the tone by having a safety meeting and telling them, you take safety seriously and this is how it’s going to be.   Right after I came on board, I had one guy test me by wearing his earplugs and listening to his Ipod while loading trucks.  I explained to him why it wasn’t going to be tolerated and it stopped immediately.  He wanted to see what kind of boss I was by my commitment to safety.  When he saw I was serious he became my most productive and safe employee. 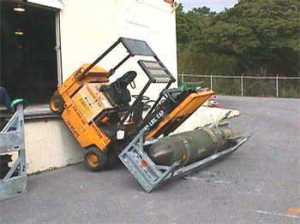 PREACH SAFETY:  Like 5S, discussed in an earlier blog, (All I really need to know about 5S I learned from Grandma) Forklift safety is an important building block to your Quality Warehouse.  Be a disciple and preach it and live it every day by  — Make sure all forklift inspections are completed at the beginning of each shift.  — Make sure you read them and respond immediately to any concerns noted.                   — When an employee shows an interest in safety issues, nurture it, don’t ever stifle it.      — Hold monthly safety meetings and try a different topic each month but always take at least a minute to remind about forklift safety.  As simple as, great month guys, no incidents.   — Hold 10-minute safety tailgate meetings on the floor once a week.  One topic you can use goes over the forklift checklist on what to actually look for during the inspection and have an employee demonstrate it to their peers.  They’ll beam with pride.  — Deal with any infractions of forklift use or near misses you, witness, immediately!  Don’t put it off, or feel like you’re cutting someone a break.  The next incident could be fatal and then it’s too late.  Pull them aside and discuss what had happened and what can be done to prevent it from happening again.  It could be as simple as to just slow down.   If there are several incidents pull their forklift privileges for a while and in all cases document, document, document.  Anyone who worked for me that had an accident or near miss had to take the certification process again.  Watch the videos and pass the written test before returning their privileges.

A busy Quality Warehouse should sound like a symphony.  You can close your eyes and listen to the horns as forklifts move in and out of trailers on the dock.  The beeps of the RF guns as the product is checked in and moved.  The whoosh of the coolers automatic doors.  Don’t stop the music or the WarehouseFlow by allowing a killer to run loose in your operation.

9 thoughts on “The Secret Killer In Your Warehouse”