Guess What?!  We finally have a new mail box on Mitchell Court!  It took the USPS 82 days to resolve this issue in the year 2013 while Phileas Fogg in 1872 was able to go around the world in only 80 days!   Good thing the USPS has worked very hard on improving their customer service and customer satisfaction.  However this is not a day of celebration but a very sad day since it took a quasi-government agency 3 months, that’s 82 days not counting Sundays to fix a simple problem and simultaneously also destroyed all the efforts they put into trying to change their poor image.  The USPS spends millions on television ads to improve their image and millions more on training and yet the bottom line is this group of under achievers with NO leadership presence failed to communicate to it’s customers, failed to return phone calls and failed to take a golden opportunity handed to them to demonstrate they are not the idiots portrayed on sitcoms and movies but instead they not only fumbled it away but then picked it up and ran it right into the opposing teams goal!

Why you ask?  Why is their attitude, “Voice of the Customer be damned!” Great question, let’s take a look at this shall we?

1-Their arrogance:  It’s an arrogance that’s spawned from the lack of competition and lack of consequences.  They know they don’t have any competition other than Federal Express and UPS for overnight and express services but when it comes to the daily delivery of first class and bulk mail we’re stuck with them.  When there is no incentive to compete to be #1 or even #5 you don’t care.   No competition breads contempt for customers.  Remember the phone company back in the day?  We didn’t get choices until they were broken up and competition came in.  The three major television networks were happy with the status quo until FOX came along and gave them some serious competition for ratings.

2-Their Leadership:  Their leadership (or should I say lack of it),  sets the tone on how things will be done by how they enforce the standards and mission statement set up by the corporation.  Lax leadership causes lax supervisors  and staff who don’t care because they know they won’t be called on the carpet for the poor service.  When they see their manager not return phone calls or show concern to customers the staff follows suit.  The manager at USPS 94589 should be very proud since his staff has fully demonstrated their lack of abilities when it comes to providing customer service, especially when it came to returning phone calls for updates that they promised to give but NEVER followed through.  That alone is disgraceful.  My staff knew their goal and the consequences if they didn’t return customer calls within 2 hours.

3- Stupidity:  How stupid is it to have their supervisors give out business cards with a phone number when there is no voice mail?  How can you foster a conversation between you and your customers when they can’t contact you or can’t rely on Betty getting the message to the person you want.  That’s just stupid, but obviously it’s the USPS way.  How stupid is it to not get information out to the public as to what’s going on and when it’ll be handled and just let them fester with anger.  That’s just stupid and as dear Forest said, “Stupid is as stupid does.” 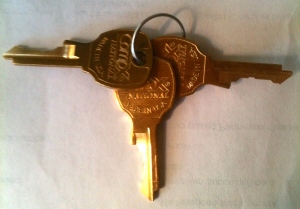 Keys to the new kingdom

So now we finally have our mail box and getting the keys at the USPS 94589 went a lot smoother than I ever imagined, I thought I was dreaming.  What’ll come out of this? Probably nothing.  The same inept manager will keep non-managing his inept supervisors who will continue to not return phone calls.  The USPS will continue to be the butt of jokes.  They will however, wonder why they continue to lose money and fail to make a profit.  I hope congress never turns the controls over to them for the one definite thing they have proven to me is they are incapable of turning it around themselves, but they do need to stop paying out good money to consultants and lobbyist who are not working for the good of the Postal Service but for their own profits and selfish needs.

It also won’t change because too many other companies and individuals count on the USPS for their own survival.  In Fiscal Year 2011 USPS paid Federal Express $1.5 Billion dollars and Kalitta Air, LLC $549 million dollars to ship on their planes. They also paid UPS a mere $101.9 Million dollars that same year.  On their list of top 150 suppliers to the USPS Federal Express was the highest paid and Postal Fleet Services, Inc came in at #150 with a take of $8.8 Million dollars.  So as you can see there are a lot of mouths to feed.

This will not be the last post you see on the USPS from me.  They have made me a new antagonist and I will continue watching and reporting on the bad as well as the good, when I find it about the USPS, but I’ll put money on more bad.  Want to share you USPS story with me.  Email is the best way.

3 thoughts on “Victory or Very Sad Day For USPS”