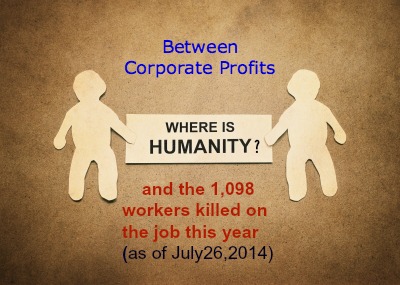 “Choose a job you love, and you will never have to work a day in your life.” – Confucious

“A mind always employed is always happy.  This is the true secret, the grand recipe, for felicity.” –Thomas Jefferson

Happy Labor Day.  It is an awesome feeling to be happy at work and enjoy what you are doing especially since like the quote says, it doesn’t feel like work at all.  There is no reason that everyone can’t be happy at work.  It’s all in the attitude.  Attitude towards your job, attitude towards workplace safety, attitude towards teamwork and life.  It’s attitude that has helped change how companies look at workplace safety and just as much your responsibility that it stays a safe workplace.  When you look at the earliest workplace fatality records, (Allegheny County, Pennsylvania) for July 1906 to June 1907 it is astounding to see that 526 workers died due to industrial accidents in ONE county!  It is estimated that in 1912, 18,000 – 21,000 workers died from work related injuries and in 1913 the Bureau of Labor Statistics documented 23,000 industrial deaths.  Thanks to common sense, attitude, knowledge and hard work with unions, state and federal regulators and the positive attitude of workers, the numbers have been greatly reduced however as of July 26, 2014 – 1,098 workers died on the job this fiscal year. Speaking of workplace fatalities, this unfortunately must be another episode of Companies Behaving Badly. 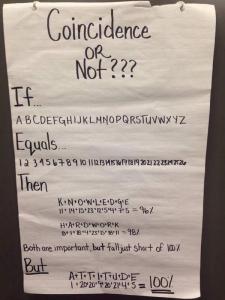 Bothell man dies as a result of forklift accident at Lynnwood business – PREVENTABLE – Chuck Lee a 69 year old was walking through a parking lot on a Monday morning when he was struck by a forklift as well as a case of items that fell of the forklift pallet.  The forklift was driven by an employee of Goodwill who stated he saw something in front of his machine and slammed on his brakes.  Mr. Lee died the next day as a result of drastic spine fractures and blunt injury of the head and torso.  When you drive a forklift you need to have a full view of what’s ahead.  Your head should be moving left to right and back while scanning with your eyes especially in an area where they is no clear path for pedestrians to follow. If your load blocks your vision then drive backwards.  Not ALL civilians know how to deal with forklifts and unfortunately Mr. Lee may have assumed the forklift saw him and would stop.  The investigators will check on the driver’s forklift training records but a license doesn’t mean safe driver.  As part of your walk of the floor you should always watch drivers operating on the floor and give appropriate feedback in private when needed.

Retailer to pay nearly $1M following compactor fatality. – PREVENTABLE – In 2009 Roy Polanco a 65 year old worker at a Macy’s warehouse had no idea the cardboard bailer he was operating had been modified not to shut down once the cycle was engaged.  He found this out after he fell into the bailer through a unguarded section and while his screams were probably short as his body was being crushed he was also decapitated.  Any machine or piece of heavy equipment should NEVER be modified without the guidance and approval of the manufacturer.  Then after any modifications on equipment employees need to be re-trained on the modifications made. Anyone, be it CEO, manager or fellow worker who tells you it’s o.k. to disconnect any emergency stop is insane and should be avoided, in fact anyone who orders and carries out this action that results in an employee death should be on trial for murder.

Cal/OSHA $77,250 Fine For Tug Driver’s Death Highlights Importance Of Ramp Safety Compliance – PREVENTABLE – Cesar Valenzuela a 51 year old ramp worker employed by Menzies Aviation was killed when his tug hit a curb and threw him out of the vehicle. Like cars and forklifts, tugs are required to have seat belts as well, which means they’re their to be used and not as a vehicle ornament.  However Cesar couldn’t use the seat belt even if he wanted too since according to the findings of the investigation the tug had no working seat belt and in fact stated Menzies aviation didn’t think it important enough to require their workers to use those seat belts in fact they discouraged their use.  What’s even more frustrating about this needless death is that a reminder alert about using seat belts was issued in 2012 when another ground worker died in Atlanta when thrown from his vehicle.  When safety equipment is installed it’s there for a reason, use it and if someone tells you otherwise, you’re a fool for listening.  You are mortal after all.

Two injured in forklift accident at Highland Rim Speedway – PREVENTABLE – Basic forklift safety teaches you never to raise someone up on the forks of a lift and that stability lessens the higher and more forward they are raised as two gentlemen found out first hand at the Highland Rim Speedway when their extended forklift tipped over injuring both.  As long as you use a forklift for what it was designed to handle, operate in specified areas only, don’t exceed its weight limits and observe posted speed limits you should have no worries operating one. It’s common sense.

1 injured after forklift tips while unloading merchandise – PREVENTABLE – Meanwhile in Calgary, Canada, a forklift operator unloading heavy merchandise off a trailer sustained minor injuries when thrown from his vehicle when it tipped over.  The trailer unit he was unloading also tipped forward and had to be stabilized before the forklift operator could be rescued.  Again people, make sure you know the forklifts weight capacities before unloading any trailer and make sure the trailer is stabilized properly to avoid tip overs.  Also make sure to wear that seat belt, in the event of a tip over you don’t want to get thrown off and possibly wind up under the 8000 pound forklift.

Hefty fines for forklift accident – PREVENTABLE – In New Zealand forklift accidents are an issue as well. The latest news is 3 companies were fined for a total of $140,000 for the broken ankle and severe gash Erica Machado received when she was hit by forklift that suddenly backed up as she was packing kiwi fruit.  The 3 companies operating and working with the packing plant, LRK Trays Ltd, Mount Pack and Cool Ltd were found not to do enough to protect their workers from this type of accident so each was fined $39,375 in addition to $20,000 in reparation to Ms. Machado.  People need to respect forklifts and forklifts need to have assigned areas to operate within.  Mixing them together is a recipe for disaster.

Worker injured at Western Sugar Plant, OSHA investigating – PREVENTABLE – Yet another accident has occurred at a Western Sugar plant. While employees were cleaning the inside of a drying cylinder, they did so in the confidence and trust that management had ensured a proper LOTO.  That is until sugar began falling and filling the cylinder as the heavy hot sugar hit one worker and pushed his head forward between his legs, injuring him.  The other workers scrambled and were able to pull him free from under the accumulating sugar since he had followed proper procedure and had a tag line on him. This was a serious break down in internal communication since someone either removed the LOTO to soon or they didn’t have one in place or production somehow sent it over to soon.  You need to protect your workers operating in a confined space and make sure everyone is free and clear before allowing any production to proceed.  I would begin a round of re-training before someone dies.

Lawyer: Dickey’s Barbecue in Utah Had Another Chemical Burn – PREVENTABLE – This incident is a reminder as to why training of employees is so important and why proper labeling of all containers is critical especially in any food service operation.  Before a customer drank tea laced with a chemical cleaning compound at Dickey’s Barbecue and almost died an employee had burned her tongue earlier on the same substance when she tested the content of a sugar container to make sure it was free of the cleaning compound. At that point you’d think that management should have been aware there was a problem and inspected everything.  This is were leadership is so critical to an operation.  Not in the daily routine but the out of ordinary things that may pop up and need attention.  The chemical first got into the container when an employee trying to top off the sugar bucket poured in cleaning product.  Again, this is due to lack of training and lack of leadership.

Hamburg contractor faces $56,400 in OSHA fines – PREVENTABLE – Employees of Kevin Burke Home Improvement were found on site by an OSHA inspector working on a roof and scaffolding without wearing fall protection and were told to stop work until proper fall protection was given to all workers as needed. You’d think a company would think wow we really should do better than that, NOT!  The OSHA inspector returned the next day to find workers yet again working without fall protection gear and so was issued 7 violations, 2 of which were willful, which means that Kevin Burke Home Improvement couldn’t care less if one of their workers fell off the roof. The proposed penalty is $56,400

Death on the Job – Dallas Morning News analysis of federal data – “on average a Texas worker is 12% more likely to be killed on the job than someone doing the same job elsewhere.”  Recently Texas has been trying to steal companies from other states by offering tax incentives and other promises.  Possible the lack of safety may be one reason.  Read the report.

Feds slam California over Cal/OSHA – SIGN OF THE TIMES – Once upon a time CalOSHA had a dream of being the best at keeping the workers of California safe. In fact, their laws and enforcement was second to none and a notch better than OSHA itself.  But after years of budget deficits and the retreading of termed out politicians into state agencies and you wind up with the current sad state of affairs, lacking inspectors and lacking leadership.

Job-related accidents kill 1,100 in 7 months – TURKEY – The number of industrial accidental deaths has gotten out of hand in Turkey to the point that there is an average of 4 workers dying per day.  As the trade unions make the public aware of these statistics and try to work with the government for protection, it will not change anytime soon with the absence of workplace safety regulation enforcement.

Outdoor Rubber Stair Tread – NEW PRODUCT – Do you have unsafe outdoor stairs?  Musson outdoor rubber stair treads, made from recycled rubber may be the answer.

That my friends brings this episode of Companies Behaving Badly to a close.  Please feel free to use these examples at your next safety tailgate/toolbox meeting. There are many facets to a safe workplace and one of them is YOU!  You are just as responsible for a safe workplace as is the company and management.  You can refuse to do an unsafe act, you can insist that LOTO is done before you stick your limbs into a machine and you can insist on the proper P.P.E.  Your manhood will be challenged for not sticking you neck out and being a team player but a man knows better than to place your life on a sucker bet.  Remember, gears & machines can break your bones but names will never harm you or put you in E.R.  Be a safety advocate at work, keep up the good attitude, stay safe for the life that you save may be your own.  Until September 15th.