The San Francisco bay area sports scene is all skitter scattered because after 3 straight years of being in the playoffs, this season by fan standards was a flop as we missed the playoffs with a .500 season. Sure it was also a year of turmoil, leaks, accusations, rumors and injuries which may have helped bring the parting of ways for our San Francisco 49ers (who really play in Santa Clara-43.3 miles away) and great coach Jim Harbaugh. A decision that feeds the fear of an uncertain future around here. The cause of the break up as said by owner Jed York was that it was over philosophical differences and the breakup was mutual which means they didn’t get along and a lot of fans are angry the coach has left and are blaming the owner for this folly. However this article is not sports related but the recent events between coach Jim Harbaugh and owner Jed York did made me think of past experiences I’ve had with owners of businesses.

I’ve worked for a few small companies during my career. It has it’s advantages and disadvantages, they’re small enough that you’re known by your name and not a number, there is no where as much red tape as a large company and change is usually quicker.  Usually.  One company owner had brought me on board to help “change the culture” but soon after he proceeded to micromanage my every step.  As the suffocation increased I had the epiphany that the problem was not all with the culture but mostly the owner.  Even though you are obtaining the results wanted by all involved, you are either not doing it exactly the way the owner would have or as fast.  It shouldn’t make a difference in the method used to get us to the goal as long as everything is ethical, safe and done within all agreed constraints, who cares? In this case the owner’s Ego did, it still needed to step in to fix problems he thinks he sees and this adds un-needed confusion to the staff as the new processes you had recently put into place are over-ridden or bypassed by the owner’s Ego when you’re not around.  Now the owner begins to feel they are doing all the heavy lifting thinking you are not carrying your load when actually your load increased as you try to re-establish order in his wake. 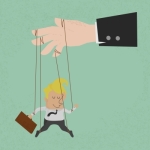 These types of companies run by owner’s Ego survive when economic times are great and there is plenty of business for everyone and you can survive very well off that small piece of the pie chart.  However when the economy tanks these companies usually collapse within a year after enduring a slow painful death as there is no creativity allowed by the staff and lower management to deal with problems mainly because, as the owner’s Ego moods go so goes the daily operation.  Ever been trapped into one of those “management emergency meetings” held at the end of a long work day with little notice?  When the owner’s Ego senses that things are slumping and need to improve, or he wants to try a new direction or new course or worse, the loss of a long time big account.   We watch and see the owner’s Ego in action as he single handedly tries to save the company as for some reason only his ideas make the agenda while others are unceremoniously tossed.  Here it comes, cut backs, layoffs, flexibility is needed by all as each job is now everyones job, oh and that 5% reduction in salary, it’s only temporary.  Problem is people lose interest, get frustrated and begin to find jobs in other companies and with the hiring freeze others have to pickup the slack and feel trapped and begin not to care anymore as they just go through the motions.  Customers are calling and calling and want to know the whereabouts of their orders and vendors are calling and calling and want to know where their payments are and oh yea, in that case you’ve been cut off.  This leads to more emergency meetings, more layoffs, more brainstorming for ideas that will be shot down and more failure by the troops which leads to more hard feelings between the owner and your lack of hard work and before you know it you part ways over philosophical differences but its a mutual parting the ways as you were not made in his image and sorry you were never as good as me and definitely not the leaders fault.  Spoiler alert, it’s the leader. The doors close, end of story except for the loyal employees who work their butts off and are the ones who suffer most.

Then there are the few small companies that I’ve been very fortunate to work for, where the owner didn’t just hire me to “change the culture” but told me instead to “build my team”.  There is nothing more of a turn on than being told, here’s the ball, run with it, oh and what do you need to get there?  These owners are leaders and have a real vision of their company in the future and understand to allow others to help them obtain it and then share their visions as well.  Open thought is not suppressed and meetings are an exchange of ideas and not an oratory of doom.  They take an interest in their workers and help them grow and develop as employees and individuals and don’t lie to them.  If you should, oops, have a fumble.  These are the owners who say, what did you learn from this and now get back up on the damn horse and get that touchdown.  These owners are leaders and the success of their employees to them means they are successful.  I’ve always believed you can have all the great talent in the world assembled before you but it still takes the right leadership to make it all work together and win.  Which leader you become is totally up to you, but I know which way I’d go.
With that said, while the 49ers search for a new coach I can concentrate on the Golden State Warriors.