The very first safety meeting or training you ever had was not at your first job, it was more likely done at home.  It was delivered by either mom or dad and could have gone any which way from a nice gentle reminder, that’s something you shouldn’t touch sweetheart to a loud shattering “Are you stupid!?”, followed by a jolting smack in the back of the head.
I grew up, in what may seem by today’s standards, as a dark and medieval as we didn’t have seat belts in cars let alone child seats, didn’t wear helmets when biking, spent most of the day outside without sunscreen, most of our fresh fruits and vegetables came out of cans, and everyone smoked, in-doors.  We had no color television let alone HD, no video games or mobile phones so we were forced to communicate on a primitive level, face to face!  We were exposed to many things as groups under the guise of a social event so we could all each get the chicken pox, measles, German measles or mumps at the same time and over and done with.  I was a very hyperactive young boy with an enormous curiosity and no fear, (not a good combination) that drove my parents absolutely crazy with many trips to our Doctor, whose office was very fortunately located on the ground floor of our apartment building.  At least once a month I was there for treatment on cuts, fractures, scrapes, stitches, X-rays and tetanus shots including once, hit by a car crossing the street.

Through trial and error, bumps and bruises, key observations of others, I began to learn what posed a hazard and developed an ability to see them before they happened.  I admit some of the lessons I learned were through the expense of what others experienced, like Tom.  Tom was a very good friend of my dad and a first-rate car mechanic,  who allowed me to occasionally hang around the garage after school, I was in 5th grade.  He was an interesting character, with the 2 missing fingers from his right hand, that a fan blade removed for him because he wasn’t paying attention or buzzed or both. After each swig out of his bottle of whiskey, he’d make a face, look at me and tell me what a nasty habit it was.  He also was of the rare breed that would wash the grease and grime of the cars off his hands with gasoline.  “Great stuff” he would tell me, “universal solvent”, even then I knew he was wrong.  Tom also smoked unfiltered chesterfields by the pack full and one day, after he cleaned his hands and lit-up, as fate would have it, I got another life lesson and witnessed the entire event and believe me, it’s not something that you soon forget.

In Ireland, their research has found that 16% of 3-year-olds wind up in hospital from injuries when there are 2 parents and it jumps to 46% for 3-year-olds with only 1 parent. Makes sense, when you have an active child like me it’s much easier to control when there are 2 parents doing the job.  (Read more here)    Over the years, our society has put many, many policies into place to help protect guys like Tom from themselves and to protect young children from accidents and yet, we still want to put more into place.  But is that a smart idea?  All parents have the natural urge to want to keep their children in a protective cocoon but does that help them prepare for the real hazards of life?  Even with all the new ways to protect children, they are still finding their ways into accidents, so have we done a disservice by not exposing them so they can learn first hand and understand the nature of a hazard and why it’s a hazard?  I really don’t know the real answer, to me, children need a certain amount of freedom to grow, explore and thrive which I gave both my children but then, I also believe all the reliance on technology is dumbing us down. Schools are abandoning the teaching of cursive, children can no longer read the hands on a clock, common sense is not as abundant.  Very glad to see the U.S. Navy recognized this and is teaching ship navigators how to use a sextant.  Always good to know the analog way as a backup.  I’m sure everyone has their own opinion on this topic and how to protect their child.  With that all said, may I share with you the 15 safety things I learned as a child. 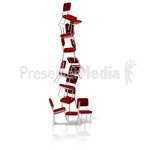 1 – When building your own stairway to heaven, make sure it’s sturdy.  Stacking different types of furniture with other household items presents challenges dealing with stability and engineering. Remember, the fall always looks worse than it really is and the quality of the treat is worth 3X the risk.
2 -You can tell if your dad is a baby boomer by the scar on his forehead. Before backyard trampolines us long time apartment dwellers used our parents’ bed as a trampoline for exercise and entertainment.  The goal was to see if we could hit the ceiling with our heads but reentry was dangerous if you lost track of where you were coming down, those headboards dispensed many cracked foreheads.
3 – Playing with matches is dangerous and may burn more then you want, especially when you use dad’s lighter fluid to pour all over your sister’s metal dollhouse.  The panic is debilitating as you watch and say, Wow, that went up fast.
4 – Dad’s double-edged razor blades came in a really cool dispenser. With the flick of your thumb, they’d pop out the side, one after another after another, oops all gone and dad’s going to be mad, unfortunately they’re much harder to put back in even if you can hold them steady enough, where’s that blood coming from, didn’t feel anything.  Oh wait, It’s me!  Sliced right between my thumb and forefinger.
5 – Crossing on the green light and only in the crosswalks is safe but nowhere near as much fun as dodging out from behind parked cars.  Apparently, most drivers, check that, all drivers don’t appreciate it or see the humor.  My elementary school principal saw it as well and he didn’t see the humor either so I got to learn a lot about crossing safely from the 200-word essay on the dangers of not crossing at the light I had to write.
6 -While playing around with my erector set motor for the crane I built, I learned about pinch points when the gears in the motor stopped turning when my finger got caught in the gears.

7 – Grabbing handles of items on the stove to pull yourself up to get a better view is not a good idea, especially if they have hot liquids in them.
8 – Electric outlets can be fascinating with that little smiley like face.  You can’t quite get the dinner knife into there but dad’s flat screwdriver on the other hand.  Perfect fit, Whoa!
9 – Mixing different cleansers found under the sink, do not make cleaning twice as easier or faster but can create a deadly poisonous toxic cloud throughout the house for the whole family to enjoy.  I think it may also be flammable.
10 -The expression, look before you leap are words to live by.  Before one jumps from anything, a rock, a hill, a billboard sign, check that there are no boards with nails sticking up waiting for your foot on the landing.  Nailed it!
11 -Running with scissors or any sharp object is never a good idea and only made even worse when they’re pointed your way.
12 -Empty plastic bags don’t make for really great masks, space helmets or underwater gear.  It’s very difficult to breathe and keep from passing out.
13 -The possibility of drowning was not one of the options that had entered my mind, after lying to everyone how well I could swim.  Came real close.

14 -Cans of goodies use to come with a really cool key you’d use to wind around the can to remove the band of steel sealing it shut.  The challenge to getting the key was removing the steel band and did I mention how sharp the steel was.  Oh, will you look at that, bleeding again.
15 -Listening to the railroad tracks to see if a train is coming or daring someone to cross the tracks or hopping a freight train like in the movies may be exciting and adventurous but does not make for the best playground for kids.
Yes, I survived all 15 and have the scars to prove it.  Did it make me better? Smarter? Maybe but I know I enjoyed my childhood.  Join the conversation.  No matter what generation you are part of, what safety things did you learn as a child you’d like to share?