Welcome back and thank you for stopping by.

A lot of people concerned about what I may get started doing but not why I shouldn’t get started except that it’s a nasty habit.that’s hard to kick and of course many of these well intentioned folks were role models that affected me for life.  “Hey. You a safe worker?  No? Good, it’s a nasty habit I wish I could kick.”  I could see Stubby, one of my dad’s buddies who owned a garage/gas station saying that.  He earned his nickname while working on a car when the spinning fan blade separated him from three of his fingers.  “You don’t want to get started on this.”  He would have been right, had he said that.

It’s not enough just to tell people not to do something, especially since some folks will do it anyway and don’t have to wait for a dare!  It also sounds very hypocritical with “Do as I say, not as I do” if not properly explained.  You want people to learn and understand WHY they shouldn’t do it by explaining what the consequences can be, how the hazard can be mitigated, does exposure need to be limited?  So I really don’t need to lose fingers in the process of getting the job completed?  The more you teach and educate a worker, the don’t do this morphs into “what you should do” to safely complete tasks while also building their confidence and giving you a better prepared and safer worker.

When a near miss or accident occurs you do an investigation and determine if your training needs improving, the employee needs improvement or more safeguards are needed to be put into place but don’t let those events distract you from missing the little things that indicate change is needed.  When leadership is on the shop floor, listening, observing and walking in workers steps you’ll see if there’s an area where workers keep bumping their heads on a overhead pipe or the glue machine that heats up to the point it can burn your hand.  Will bump caps or padding the pipe help best?  Should I invest in gloves or talk to the glue machine company rep about the machine?  Open and honest communication between people, making a better and safer workplace.  Wow!  What a concept.

Sugarloaf Owners Cited by OSHA Following Employee Death  Hazards lurk everywhere and sometimes the company leadership just doesn’t see the big picture from behind their desk, blinded by the glare from their computer screen.  Don’t overlook or fail to report little safety incidents like head bumping, cut fingers, burns to management and see if PPE is required to help mitigate these issues.  At one time, baseball players didn’t wear batting helmets and  hockey players didn’t wear helmets.  Now it’s pretty much mandatory for a safe work environment.  This is also where having safety committees can help as they can review these incidents and help bring in the best solution through open discussion and employee input.

When companies go through growing pains, unfortunately sometimes so do the workers.  Amazon has had a few bumps in the road,  Two Worker Deaths in September at Different Amazon Warehouses Spawn Concern from Worker Advocates.  Amazon’s success has made them everyones favorite target but two deaths in one month does raise concerns.  Then Amazon faces $28,000 fine after Indiana warehouse worker crushed by a forklift.  They found that Amazon didn’t provide adequate training and safety procedures weren’t followed.  These are symptoms of a fast paced, fast growing company where training is rushed and can be confusing.  It also sends a bad message when you say Worker Safety is important to Amazon and then pull a double standard mixed message of when it’s convenient.  I understand jobs are tough to come by and working for Amazon can be like hitting the jackpot and finding where they keep the soylent green, but if you’re not sure about something, ASK!  If your supervisor seems bothered or put out by your question then this may not be the place you want to work.  It’s your life.  You choose.

Then Tesla, another successful company driven by one man, to make life better for all of us, well, maybe, except for their own workers.  Tesla’s Biggest Problems.  Running behind on production goals, increased injuries and accidents on the job what’s a CEO to do?  Fire as many as you can to send a message to workers that Safety First is just a slogan and has no real meaning if we don’t get cars on the road.  CalOSHA may have to set up a field office at the plant in Milpitas.  I have a problem with companies that blame their problems on the workers.  If you don’t properly train workers, if you don’t make safety a real priority and just say how important safety is, people do eventually see through the BS.  Then when you push the poorly trained poorly disciplined workforce they get exhausted working 16 hour days and accidents as well as sick calls greatly increase and the worst thing to do in a situation like that is come down hard.  Terminating people for your faults only tell me you don’t care about anyone but yourself.  Workers respond much better when they’re part of the discussion on safety and conditions.

Being prepared means not just having the equipment and supplies to deal with an emergency but also checking and monitoring them to make sure they’ll be action ready when needed.  Make sure fire extinguishers, emergency lights and battery backup, eye wash stations, respirators and other emergency response equipment are on a regular inspection program.  The manufacturer is a good place to find out how often.  Don’t make excuses to put it off, this is critical to safety.  Otherwise you may find yourself making excuses in front of a jury.

Thanks for stopping by and checking this episode out.  We appreciate you all.  As some of you head out to points unknown for Thanksgiving and others prepare to entertain friends and family, please be safe in your travels.  Don’t let an asshole ruin your holiday, be patient and be prepared.  If you are feeling alone, depressed or hopeless please remember you are NOT alone and you can speak to someone who doesn’t judge.  1-800-273-TALK (8255)  There is no shame asking for help.

Until next month, Happy Thanksgiving.  Never keep quiet about safety for the life you save may be your own. 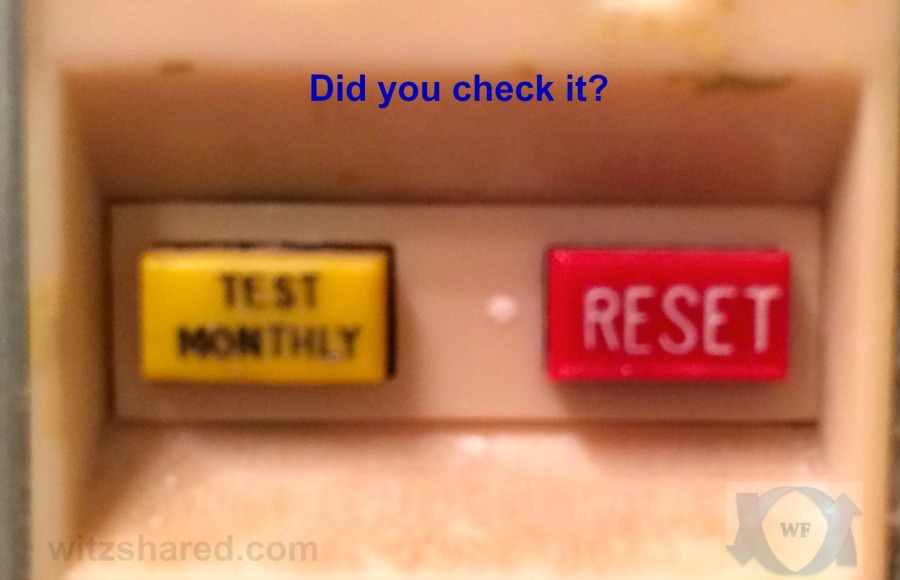