Welcome back.  Hope all is well and thank you for stopping by.  How are those New Year Resolutions going?  Still on track or trackless?  Benjamin Franklin once said, “Don’t put off until tomorrow what you can do today.”  What a wise man he was since he knew even before they were invented, that people would slack off and forget to change the batteries in their smoke and carbon monoxide detectors.  Please don’t forget to check them along with your fire extinguisher.  Give yourself every chance to keep your home and family protected.

The boob tube was an endearing term for the television.  It was believed, that much like Rock and Roll music, it would rot our brains out.  Considering all the events of late it is quite possible that the fears were well-founded.  During an episode of “The Americans”, Nina Sergeevna Krilova is brought to a room and told that due to her actions she was sentenced to death that would be carried out soon.  She drops to her knees in horror and before it all could sink in for her or me for that matter a soldier pulled out his gun and shot her in the back of the head.  It was sudden, it was brutal.  It left an uneasy feeling.  I felt bad for her and thought what a waste of human life. Did it make me less sensitive to killing?  I don’t think so, but the scene is still haunting me.  However, if I was to watch graphic homicidal acts over and over, day after day I guess I would finally get used to it to the point it becomes the norm.

Also appearing on the boob tube is a very lovely couple, Chip and Joanna Gaines.  She is a beautiful person with a beautiful spirit and Chip has to be one of the luckiest guys in the world so it’s confusing when he goes out of his way to make Joanna a beautiful widow.  On one episode of their show, Chip, in an enclosed area with a well-sized cement saw is determined to cut out a section of the wall.  With only a t-shirt wrapped around his nose and mouth for PPE, sawing enclosed by a cloud of dust filled with silica, brick, and cement that you can barely see him, with NO safety glasses, no dust mask, no ear protection.  There was enough dust that a spark may have caused a minor flash.  Chip, true to form made jokes about his experience.  Was I desensitized to safety on a construction site by this?  No, I got angry because there are many, many DIYers watching Chip, laughing along with him, that don’t understand how important PPE is to protecting and keeping you from winding up in the ER or worse.  It’s very hard to stop horseplay on the job when so many DIY shows glorify this childish behavior.

It’s not just Chip.  The Property Brothers, Drew and Jonathan are just as bad, demonstrating bad behavior on a job site and I’m sure the horseplay is to make the shows entertaining instead of a boring production pointing out and demonstrating the proper safety procedures to follow on demolition day.  That’s the problem, it makes horseplay and dangerous behavior look like fun, and it is until someone gets hurt.  In fact, the DIY Network and HGTV don’t see to care what bad behavior their stars portray on the boob tube.  I’ve never once seen a “safety minute” or a disclaimer before the episode, that the behavior is contrary to all safety laws.  The closest that comes to that is the show “First Time Flippers”, where they will insert comments pointing out dangerous behavior but only to make fun of it, not to take it seriously.

On some shows on the boob tube, you’ll see people cut wires, remove fixtures or rip down ceiling fans without checking to make sure electricity or water are turned off.  It’s a funny moment when the person is electrically shocked or sprayed with water.  However, there is one person who does not find L.O.T.O. funny or comedic element.  Man loses legs in workplace accident at Alhambra Foundry, company fined nearly $300K  2 workers at the foundry were cleaning and unblocking a 38-feet-long auger screw conveyor at the bottom hopper without effectively de-energizing or locking out the equipment.  One of the workers re-entered the 20-inch square opening after the cleaning was done to retrieve a work light from inside the confined space when a maintenance worker 45 feet away from energized the equipment to perform a test. The moving auger screw pulled the worker into the screw conveyor. Both his legs had to be amputated to free him, regulators said.  The most infuriating part is Cal/OSHA cited the company, Alhambra Foundry, for similar violations eight years ago. They probably thought it funny and would make for good television to hear someone scrambling and screaming in panic and pain.  It was so funny that Cal/OSHA fined them $282,390.  This is why you need a comprehensive Lock Out Tag Out program and ENFORCE it!!  Under a proper program, there would be 2 lockouts, one for each person entering the area.  The last man out removes his lock, that way no one can inadvertently turn the machine on.  One other thing, the worker re-entering the hopper was not monitored by a confined space attendant, so no one had a clue he was in there.  Use LOTO and save lives.

Ignoring Safety at the workplace can cost you so much more.  Construction Worker Left Paralyzed Settles For $8.225 Million in Essex   The worker was rendered paraplegic after falling off a scaffold at a construction site.  That must have been knee slapping funny to be over 6 feet in the air without fall protection.  Hey, they get away with it on television.  Jose Criollo, then 46, was employed by Empire Home Improvements when he was working at a job site in Clark on Nov. 15, 2013. Criollo was working on a scaffolding tower when dust and debris from above fell into his eyes, causing him to take a step backward and fall to the ground below.  He was diagnosed with a fractured spine at T12-T13, with a complete spinal cord injury. He underwent emergency surgery and remained hospitalized for more than a month, followed by four months in a rehabilitation facility.  Whether you’re working high up for work or around the home, remember, accidents are not planned but they are created.

Slapstick comedy with lots of pratfalls is always entertaining especially when a worker falls through a skylight.  Napa area winery appealing fines recommended after Vallejo man’s deadly fall last year.  Daniel Mario Colombo, 56, was working at Sutter’s St. Helena winery in May 2017, making repairs to the cooling system on its roof, when he fell 16 feet through a skylight and died as he wasn’t wearing a safety harness.  During their investigation Cal/OSHA also reportedly found that the steel roofing covering the area where Colombo was working looked too much like the dirty fiberglass panels covering the skylight he fell through.  The accident may have been avoided if guard rails and other safety measures had been in place around the skylight but to make things more entertaining they weren’t and why FALLS continue to be #1 killer on the job.

Thorough training is and will always be key to any successful workplace safety program.  It greatly helps when people know what they are working with and what is expected daily.  There is no room for horseplay on the job, there is only room for professionals carrying out their tasks safely and productively without fear of dying.  If you allow workers to horseplay on the job because they need to let off steam or boys will be boys, however you justify it, will you still feel the same after you are hit with a massive repair bill for a forklift or section of the warehouse or hit with a lawsuit by the widow of an employee killed because you run a day care rather then a business.

When you begin a new job, ask lots of questions.  Do research on the internet about PPE, chemicals, labeling requirements and good practices.  Ask professionals when you get a chance but please don’t blindly follow without any knowledge, for the life you save may be your own.  Until next time, please stay safe.

Always learn from mistakes of the past.  It’s why history is so important. Be sure to begin collecting all Disasters of the World Trading Cards.  Trade disasters with your family and friends, makes for a great dinner time discussion.  After reading a few you’ll wonder how the planet is still even here. 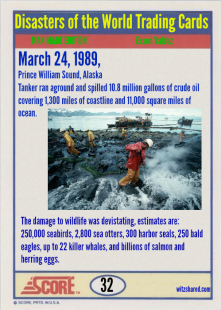