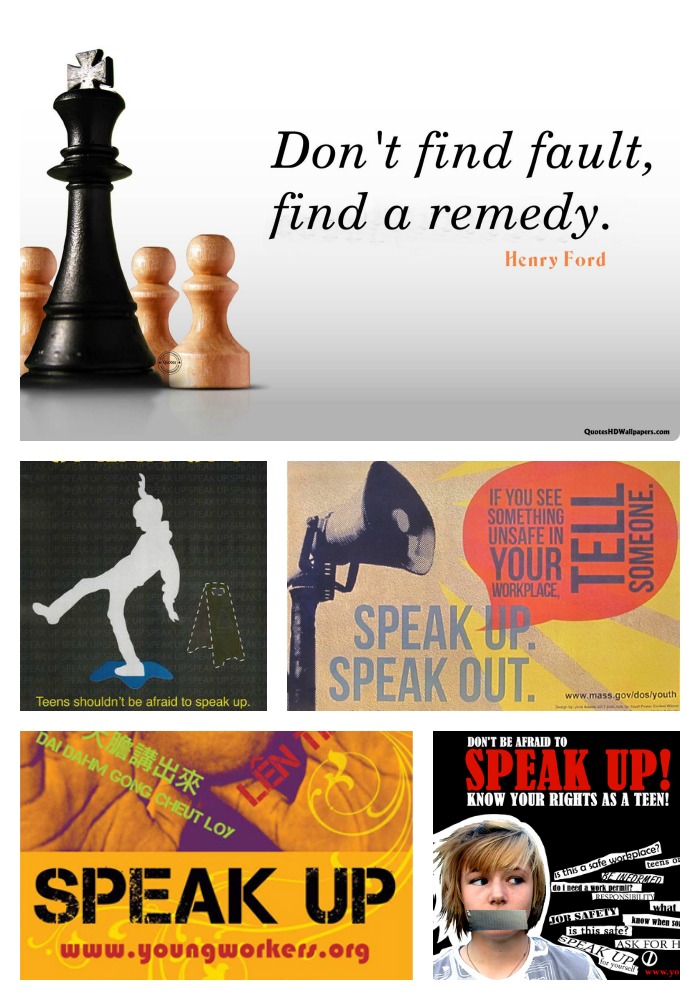 Silence may be golden but not when it comes to workplace safety. Never keep quiet about safety. It’s May and the kids will be out there looking for jobs and showing up at your place of work maybe as an intern, seasonal or temporary agency worker or maybe someone looking for a career. Before you go rolling your eyes because you feel put out by the those rookies running around in your shop and dreading it, think positive. This is an opportunity for you to be a mentor, a molder of minds and developing a future top employee or CEO.  You know when you began working you would have loved to have had someone there to show you the ropes instead of yelling what a bonehead you are?  It’s not your job? Who says? You want co-workers that are as good as you, why not demonstrate why you are that good.  I experienced it both ways, the leaders and the managers.  The ones I learned from went on to become great leaders in their fields and we formed great relationships.  Take that extra step and help that young worker have a great learning experience and you’ll leave a legacy forever.  For the young workers out there, Never stay quiet.  Ask questions. You are here to learn, there is no such thing as a stupid question but don’t operate anything until you’ve been shown and trained how.  That unfortunately sounds like yet another episode of Companies Behaving Badly.

Michigan OSHA fines injection molder – PREVENTABLE – When Russell Scharenbroch left for work that Friday he was probably thinking about plans for the weekend with his wife and 6 beautiful children.  He had no idea that he would not be coming home that day as the 34 year old worker was inside a molding machine that was left in automatic mode while he cleaned when another worker cycled the machine which then closed on Russell, crushing him to death.  His employer Grand Rapids Plastics Inc. couldn’t be bothered with enforcing the use of L.O.T.O. It’s quite possible some idiot told the boss how much time they could save by keeping the machines running and the $$ of lost production by observing the LOTO process.  For this indifference to human life the MichiganOSHA has hit them with a $558,000 proposed fine for 3 Willful serious violations related to Russell’s death including inadequate training and not using LOTO devices but then days after the accident investigation, when OSHA began looking at the whole operation they found 6 more willful serious for a grand total of 49 violations. This company had not bothered to develop any kind of safety culture and had been cited 10 times from 2011-2014 and have earned a spot on the federal Severe Violator Enforcement Program. I do greatly applaud the large fine but in my opinion since this involved several willful violations and an employee death, the owner(s) and management should be on trial for manslaughter.

First Capital Insulation exposes 3 to asbestos dangers, OSHA says – PREVENTABLE – A willful violation according to OSHA is when an employer knowingly fails to comply with a legal requirement or acted with indifference to employee safety or as I like to put it, they knew of the danger to workers but couldn’t care less what happened to them and First Capital Insulation really couldn’t care as they were found to have 7 Willful violations and were handed a proposed fine of $490,000.  First Capital not only exposed workers to asbestos dangers removing thermal pipe insulation but also failed to make sure respirators fit correctly and didn’t decontaminate workers and clothing before they left the worksite which means workers were bringing those asbestos fibers home or left in their vehicles to be inhaled.  First Capital is an environmental services company that apparently loves green, the green of money as a safety program protecting workers costs money. For these actions of disregard to human life they should be suspended from doing any future business for at least a year.

Bumble Bee Tuna, two former employees charged in 2012 death at Santa Fe Springs plant – PREVENTABLE – This goes back to 2012 where another life was lost on the job because of complacency and now the Los Angles County District Attorney’s Office is doing something about it.  Jose Melena a 62 year old employee who had worked there for 6 years was loading ovens with tuna when he stopped to make repairs on a chain. Somehow he was trapped in the oven and was burned to death.  The original CalOSHA investigation found 6 violations, 5 Serious for a proposed fine of $73,995.  They failed to perform inspections or audits, failed to determine whether the industrial ovens constituted permit-required confined spaces or post warning signs for workers about confined space or have a confined space training program.  It also turns out that Bumble Bee hadn’t bothered to report employee injuries as required by law. One worker amputated a finger and another suffered a fractured skull.  Now the D.A. has filed charges against Bumble Bee as well as Saul Florez, a former Bumble Bee safety manager and Angel Rodriguez a former Bumble Bee director of plant operations.  For all you newbies out there, if you are required to climb into a confined location like a tank, vault or other enclosed area that has only one way in and one way out, don’t go into until you are trained on confined space.  If they tell you it’s not needed call OSHA.

Mississippi Contractor Willfully Ignores Fall Protection Standards that Lead to Worker’s Death – PREVENTABLE – For Gerald Moran, a 42 year old father to two boys, it was like every other workday except today, Gerald would lose his balance on the balcony he was working on and because there wasn’t a railing to prevent his fall, Gerald fell more than 20 feet and died eight days later. His employer, Thomas Matthews Framing LLC, didn’t think it was important enough to provide fall protection to it’s employees working over 6 feet high and for that OSHA slapped them with 1 Willful and 2 Serious violations along with a proposed fine of $58,700 and proposed placement in OSHA’s Severe Violator Enforcement Program. The company also didn’t provide guardrails on scaffolding more than 10 feet above a lower level and didn’t provide training to recognize and prevent fall hazards.  Oh and they also forgot to report the death to OSHA. Here again, a willful violation has led to a death of an individual trying to provide for his family. Someone should be on trial.

Corning manufacturer cited, penalized by OSHA – PREVENTABLE – An employee had seen enough and filed a complaint with OSHA against his employer, Mid-America Steel Products Inc. The resulting inspection confirmed his complaint as they found a total of 19 violations, 17 were Serious along with a fine of $41,200.  They ranged from failing to maintain a hearing conservation program, (workers were exposed to noise levels above 85 decibels) didn’t provide required training and there was no guarding on the machinery exposing them to possible amputations.  You do not have to tolerate unsafe working conditions and you should be provided, free of charge, with hearing and sight protection when it is required.

OSHA proposes nearly $200k in fines after workers’ fatal tower fall – PREVENTABLE – NO matter how many times people survive not wearing fall protection gear when working at heights over 6 feet, there is always going to be that one time when “IT” happens. Even if your employer doesn’t offer you fall protection or train you to use it don’t be a fool.  Insist on it.  Florjan Nilaj and Gazmend Vukaj are both dead because their employer V&T Painting LLC. didn’t insist or train them to wear proper fall protection. Upon their inspection OSHA found a total of 30 violations between the tower and other worksites.  30!  Scaffolds were not designed properly, no assembled correctly, their safety program was built on a wing and a prayer.  For this lack of safety protocol a proposed fine of $199,000 is pending.  If it looks unsafe to you, it probably is unsafe. Don’t be afraid to speak up.

Workplace safety remains elusive as 44 Australians killed at work in 2015 – AUSTRALIA – Even down under they are dealing with making the workplace a much safer environment.  There have been 44 deaths so far this year. Read what areas they mostly occur.

NOM-006-STPS-2014 on Health and Safety Conditions in the Handling and Warehousing of Materials Takes Effect in Mexico – MEXICO – New tougher rules on safety have taken effect in Mexico. Check out the article and I applaud them for taking this step in safety especially with all the American companies with operations there.

Eight Michelin Plants In The U.S. Recognized For Workplace Safety – CONGRATULATIONS – U.S. Michelin was recognized at the annual Rubber Manufacturers Association meeting as 2 plants were given excellence in worker health and safety awards and 6 plants were acknowledged for significant improvement. It can be done!

Young workers not speaking up about unsafe workplaces, study finds – CHANGING CULTURE – You should never be afraid to ask a question. Not everybody learns exactly the same way. When you begin a new job you should be given some sort of orientation explaining how and when you get paid, where the restrooms are, when and how long breaks are and where and when the work schedule is posted.  If you work in the food industry or with chemicals you should receive training on proper cleaning and handling and storage of chemicals.  If at any time you are not sure about something, ask.  I always suggest taking notes during training and asking lots of questions. Don’t just nod like a bobble head.

That my friends brings yet another episode of Companies Behaving Badly to a close.  Thank you for stopping by and taking time to read these stories and hopefully they will begin a serious dialogue on workplace safety. As always please feel free to use any of these stories at your next safety tailgate/toolbox meeting.  Buffalo Springfield said it in their song For What It’s Worth, “Young people speaking their minds. Getting so much resistance from behind.”  Don’t ever be afraid to ask a question or speak up if something doesn’t appear right.  As a new and young worker your energy and enthusiasm will offend some and they will give you some resistance but don’t take it personal, blow it off and keep moving on.  There are no dues to pay, lessons to learn, hazing, initiations or secret ceremonies. Listen, learn and ask questions but never come through as a know it all.  You will cut off avenues of communication that are vital to your development as a worker. Taking the time to listen to some of the veteran workers long stories is worth more than any training video.  As they talk listen but watch their hands, the tools, the parts and what they do. Remember you never have to perform an unsafe act against your will. Stay safe and take care. Until the 15th, be safe,the life you save may be your own.