Seems to be we are always rushing these days. Rushing to work, rushing home, rushing to the weekend, rushing to die. When it comes to accidents, sometimes it is your fault. You know what I mean. The boss is not watching, you’re feeling lazy, it’s so close to shifts end, you’re angry, you’re worried, you’re distracted, you’re impatient, so you cut corners, “this time only” is the justification from the voice in your head and then it happens.  When “IT” happens let’s look at 2 possible scenarios shall we?

No excuses folks and don’t use your boss as an excuse, wear your fall protection gear. As of April 18th. (the latest data from OSHA), 706 people have died in industrial accidents and that’s just about half way into the fiscal year.  701 in the same time period last year which is good and bad news.  Good – not much more, Bad – not much less either. Don’t ever be quiet about safety, you do not deserve to die on the job because of incompetent or greedy management.  Oh man, you know this unfortunately sounds like yet another episode of Companies Behaving Badly.

OSHA: Lloyd Industries in Montgomery Township fined more than $800K – PREVENTABLE – As I’ve said to you all many times before, a willful violation means the company couldn’t care less if you die on the job even though they know full well that could happen. So what do you think about how Lloyd Industries cares about their employees after OSHA found 10 Willful violations!  Yes my friends, this duct manufacturer’s management had no problem or concern that their own employees were having fingers amputated, suffering serious lacerations as well as crushed, fractured and dislocated fingers because for what ever reason they believe in running machinery without safety guards.  Lack of machine guards wasn’t the only issue. They also came up with the money saving idea of discontinuing their audiometric testing program which shouldn’t surprise anyone since they didn’t worry about the loss of body parts why would deafness be a concern. For all this the pending fine is $822,000 and when you add up everything since 2000 to now they’ve been assessed a total of $1 million in fines and earned them a spot in the Severe Violator Enforcement Program.  There have also been 40 serious injuries during that same time period.  It is truly disgusting to see people treat other people in this manner and why this owner(s) is not in a jail cell I don’t understand.

OSHA cites $193K in penalties after Burnett Dairy worker dies in grain bin – PREVENTABLE – Again here is another company that knowingly allowed dangers to exist and this time a 52 year old long time employee died.  Burnett Dairy was cited with 2 Willful and 8 Serious safety violations, was placed in the Sever Violator Enforcement Program and a proposed fine of $193,200 because they couldn’t be bothered to LOTO a drag conveyor while the worker was trying to clear a clog in a bin when he was buried in corn and suffered a horrible death. This is a case where the person who operates the facility should be on trial for manslaughter.

OSHA cites Kewanee factory for January death – PREVENTABLE – Geoffrey Schmidt a 21 year old worker at the beginning of his journey was killed on the job in a forklift related accident.  The OSHA investigation found 4 Serious violations and proposed fine of $28,000. This was due to the fact that his employer Great Dane Limited Partnership didn’t think training was important as they lacked initial training for forklift operators, allowed employees to pass or stand under raised forks of a lift and forklifts not properly parked as the operator was not within 25 feet and the load still in the air and break not set. When ever you are out of sight of or more than 25 feet from a forklift, properly park it.  That means break on, forks lowered to ground and engine turned off. That’s it, no exceptions.  Never walk under raised forks with a load. Think of it as walking under a ladder, bad luck and dangerous.

OSHA proposes $50K fine for local paper company – PREVENTABLE – A routine inspection of Clearwater Paper Corporation by OSHA found 9 Serious violations and handed a proposed fine of $50,000.  The response by their V.P. of public affairs was the usual, employee safety is taken seriously and it’s our number one priority. Right, wink wink, nudge, nudge, it was so much a priority that the company lacked procedures for L.O.T.O. during repairs, lacked safety guards on operating machine parts, risk of amputation, lacked eye wash stations & safety latches on crane hooks as well as lacked guard rails to prevent falls over dangerous equipment. I think their corporate brass should get in touch with reality and visit the plant to take a good look at what management is doing by trying to cut corners on safety.

Westfarms Mall Forever 21 Fined $165,000 for Workplace Hazards: OSHA – PREVENTABLE – No one is going to be forever 21 when having to work in such hazardous conditions.  Forever 21 is facing a fine of $165,000 for various safety violations found in many of it’s stores.  Their corporate safety plan appears to be based on luck and apparently doesn’t believe in training staff since that will cost money.  OSHA found employees having to work with emergency exits and hallways blocked by inventory, boxes unsafely stacked as high as 10 feet posing a hazard and open boxes scattered all over. This not only puts workers in danger but customers as well but when you’re trying to make a profit and pushing as much product as possible, safety only becomes an after thought if at all.

Americold Logistics in Manchester facing $47,300 penalty for safety hazards, OSHA says – PREVENTABLE – Nothing burns my butt more then a double standard and mixed message to employees. You take the time, effort and money to train your forklift drivers to follow proper procedures, pound it into their heads about safety, being vigilant and doing daily inspections and red tagging forklifts that are in need of repair and then when it’s convenient for you, the manager who’s suppose to be offering leadership and keeping your workers safe, tell them to go ahead and use the forklifts. What kind of message are you sending Americold Logistics?  Some of the employees became confused as well by this double standard and 3 of them filled complaints with OSHA. Safety is not a matter of convenience, it’s a matter of consistently enforcing the rules.  For the lapse in intelligence they are facing a $47,300 fine. Someone needs to sit down and retrain their management staff.

Oregon OSHA fines aircraft cleaning contractor at PDX – PREVENTABLE – OregonOSHA responding to 2 employee complaints on their employer, Prospect Airport Services, a cleaning service contractor at Portland International Airport found 5 Serious health and safety violations and proposed a fine of $1,140. Prospect had workers using vehicles without seat belts for all riders, inadequate eye or face protection while using sanitizers, using issued gloves that didn’t offer enough protection, not provided with eyewash or shower while using harsh cleaners and didn’t have a written hazard communication program.  Now you know why the employees complained. When companies bid for contracts as Prospect must have, the lowest price shouldn’t be the only consideration.  You should look at their safety record and audit their safety program to make sure this is someone you want to do business with.

Tenn. Contractor Appeals OSHA Fine, Judge Increases It – UPDATE – I really enjoy this one. A contractor had appealed their willful violation involved with a crane collapse and the judge not only upheld it but raised the fine.

Report: North Dakota Again Leads Nation in Worker Fatality Rate – MOST DANGEROUS STATE – North Dakota has the distinction of being the most dangerous state 3 years in a row.  Check out the article as the booming oil and gas industries are leading to more deaths of workers.

Well my friends that brings another episode of Companies Behaving Badly to a close. Thank you for stopping by to take the time to read these articles and please don’t hesitate to use any of them at your next tailgate/toolbox safety meeting. Don’t know if you noticed but it appears more and more employees are filling complaints with OSHA.  A worker has to be pretty frustrated and at their wits end to finally make that call to OSHA.  It usually begins by bringing up the safety issues to their supervisor and getting no response or worse, some half assed comment. They go to H.R. and again nothing changes and now they are labeled as a complainer or told they’re not being a team player.  Then they see a fellow worker have a near miss or injured and still nothing changes so finally they call. NEVER blow off an employee when they’re trying to tell you about safety issues, because once OSHA is involved it’s going to cost you plenty.  Not just in money, but reputation and trust by your workers.  Remember, never stay quiet about safety for the life you safe may be your own.  Until next month, be safe. 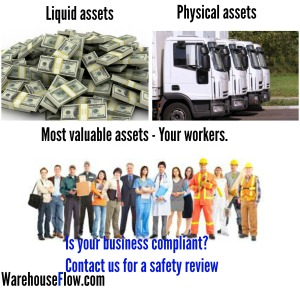