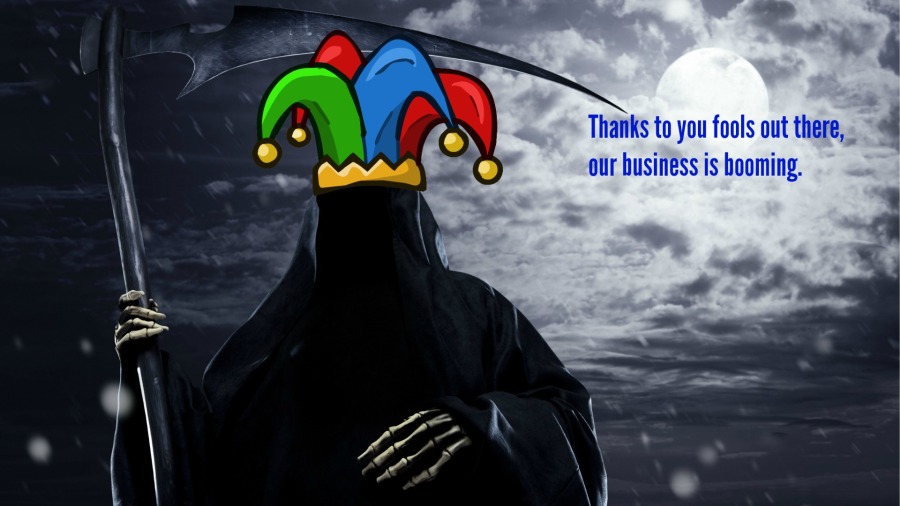 Are you the company fool?  No, not the class clown or funny guy making jokes when someone needs a laugh to improve their day.  I’m talking about the fool that doesn’t think he needs to wear his safety harness to prevent him from falling off a building. I’m talking about the fool that doesn’t think he has to LOTO his machine before clearing a jam. I’m talking about the fool who thinks horseplay with his forklift is entertainment and constantly says, I don’t need to watch out for pedestrians, they need to watch out for me.  I’m talking about the fool who doesn’t wear the necessary PPE because he’d rather be a good looking corpse than looking like a living dork.  Am I talking about you?  Yea, you. Mr. Safety is for the birds.  The bad example for young workers, pretend sleeping through safety meetings because you feel they’re boring and then complain you’re being picked on by management because they keep catching you not wearing your PPE or putting machine guards in place.  You say the bosses are selfish because they don’t care about safety, just don’t want to have to fill out paperwork on your accident or death and deal with the investigation when actually they’d rather you go home in one piece even though you’re a big pain in their ass.  Your reality check Mr. Fool, as of February 27th, for FY2016, 393 fellow workers have died in industrial accidents which is 2.62 per day.  Imagine if you Fools wake up, how much we can cut that number down.  Well, that unfortunately sounds like another episode of Companies Behaving Badly.

OSHA suggests fines for Columbus grain facility – PREVENTABLE – You can never underestimate how a hazard can so quickly kill you.  I can think of no worst way to die then to be engulfed in grain and slowly suffocating as you try to fight your way out of what seems like quick sand.  Duffy Grain apparently didn’t care if their workers died as they were cited for 2 Willful and 6 Serious safety violations which earned them a place in the Severe Violator Enforcement Program and a proposed fine of $122,500.  Workers had to deal with moving grain hazards inside bins as well as an operating auger and moving conveyor and other moving parts without guarding.  They also did’t receive harnesses with lifelines for immediate extraction or respiratory protection.  These conditions are only setting you up for failure because the employer couldn’t care less.  Before you go into any bin, know and understand confined space rules and practices.  No machinery should be operating while you’re in there, the atmosphere should be tested before entry and you should have safety equipment to allow you to work without fear of becoming trapped and dying.  If your employer does not provide you with these items call the OSHA hotline at 1- (800) 321-6742.

A federal workplace safety agency is proposing $105,000 in fines for a Wisconsin company after a construction worker was killed – PREVENTABLE – An 18 year old is dead, after three months on the job, because his employer, Black River Falls thought it was o.k. to have an uncertified driver, who had no use of his left arm, to operate a forklift. That’s why they were hit with 1 Willful and 5 Serious safety violations along with a proposed fine of $105,000.  You can read my thoughts on this incident, Really Burns My Butt-Die Young. If this company was the lowest bidder for the project, then it proves you really do get what you pay for.  No training, don’t operate it.  Period. Don’t be a fool.

Alabama company cited for willful, repeated safety violations by OSHA – PREVENTABLE – D&J Enterprises, while installing new water and sewer lines allowed their employees to work in an excavation of up to 10 feet deep without the benefit of cave-in protection.  Even after they were told by OSHA last October, that they had to provide training to their employees on how to recognize and avoid cave-in hazards and allowed to reduce the penalty then, after promising to do the training, were found in January to do it again and not train the workers!  That’s what you get when you try to be a nice guy and work with the company and reduce the citation from willful to serious, but this company has no honor and put their employees right into harms way.  This time they were issued 1 Willful and 1 Repeat violation for a proposed fine of $64,350.  In my opinion they shouldn’t be allowed to bid on any State/county/city projects for a year.  As I said before, if they were the lowest bidder, well you know the rest.

OSHA cites UltraTec for 2015 explosions – PREVENTABLE – Some companies just don’t get it or their egos are so big they just can’t take criticism.  In February, 2015, UltraTec, a special effects company had an explosion that killed 2 employees and the OSHA investigation led to 12 Serious violations.  A month later they had another explosion but luckily no one were injured or killed.  The OSHA investigation this time turned up 4 Repeat, 6 Serious and 5 other than.  The repeat violations, which means they were not corrected since the previous explosion were, documenting that safety equipment complies with generally accepted engineering practices for the manufacture and storage of fireworks, updating the process hazard analysis at least every five years, developing and implementing written operating procedures for all pyrotechnic products and implementing procedures to manage changes to the production process.  They also were found not to be preparing incident reports at the conclusion of an investigation or making sure containers of hazardous chemicals were labeled.  Kind of important.  The proposed fine is about 73,000.  This company engages in a dangerous business and seems to believe they can mitigate the dangers by rubbing a rabbits foot for luck.

OSHA fines Ideal Snacks for violations – PREVENTABLE – It’s been my experience that it takes a lot of frustration to get someone to finally call OSHA and file a complaint. It usually begins with bringing up a safety issue to your supervisor.  What ever it is, you know it’s not right. A good supervisor would get back to you and let you know what’s going on but you hear nothing. You ask again and your told to forget it, get over it, deal with it or the continued silence.  You speak to an H.R. rep and express your concerns and next thing you know your supervisor is riding your ass.  Pushing you and pushing you hoping you’ll get the message. No one in management seems to care or want to fix this problem but you like what you’re doing but don’t want to die at work.  Your home with the family and you enjoy every minute with them and you think of the hazard at work and you finally reach that point.  You sit down, pick up the phone and you dial the OSHA Hotline, 1-800-321-6742.  If I had to guess I’d say that’s what happened at Ideal Snacks as OSHA conducted inspections based on complaints and they found 3 Serious and 1 other than. Things that the company could have taken care off or as least given a schedule of repairs to the employees so they knew it was being done.  OSHA found employees in the laundry department who handled 5 gallon buckets of bleach were not given safety goggles or rubber aprons and of course no training.  They also found workers were exposed to fall hazards, another easy fix but now they’ve been given a proposed fined of $13,550 but in a settlement paid $10,162.50.  Never keep quiet about safety.

Nyrstar Clarksville receives Commissioner’s Safety Award – AWARD WINNER – 884,904 combined work hours without a lost time incident. It can be done. Check it out.

Scissor Lift Accidents Spur OSHA to Issue Hazard Warning – UPDATE – Equipment like scissor lifts are not toys.  They are to be respected and used only within the manufacturers guidelines.  Maybe this is a good time to have a refresher for the whole staff. 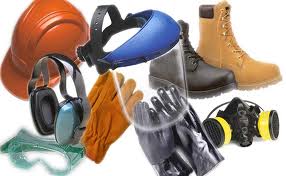 OSHA Says Employers Must Pay Tab for PPE – INFO – Your employer, whether you are a regular employee or a temporary worker must supply you with most Personal Protective Equipment at NO CHARGE.  That means you don’t pay for it at all and you should not have charges for most PPE on your pay check.  Read the list and be in the know.  Su empleador , si usted es un empleado regular o un trabajador temporal que debe suministrar con más Equipo de Protección Personal sin costo alguno. Eso significa que usted no pagar por ello en absoluto y que no debería tener cargos por la mayoría del PPE en su cheque de pago . Lea la lista y estar en el saber .

Well, that brings yet another episode of Companies Behaving Badly to a close.  Thank you for taking the time to stop by and check out the stories.  As always, please feel free to use any or all of the stories at you next company tailgate/toolbox meeting.  No matter what level of leadership you are; foreperson, supervisor, manager, department head, plant manager, VP operations or CEO, you are only as good as the level of trust your employees have for you and listening and following up are the keys to developing that trust.  Never turn off an employee by ignoring their concerns. It’s the worst thing you can do and don’t tell me there’s nothing you can do to help.  You have to want too.  At one place of employment as a new shift manager employees brought safety concerns to me that had been brought up to previous shift managers but nothing was done.  I listened and I looked into it and found there was an internal work order system and I learned how to use it.  I began generating work orders as “safety priority” daily for a week.  The maintenance department hated me as they had to finally account for fixing some hazards.  I also posted for my team to keep track of a list of the work orders, by number, safety concern, expected date of completion and when completed.  Safety awareness was reborn and communication began to flourish and accidents became rare and productivity excelled.  The wall between maintenance and operations came down as each now understood the others goals and how they could be accomplished working together. Treat your workers with respect, listen, work together and you’ll be amazed what can be achieved.   Until the 15th, stay safe and never keep quiet about safety.