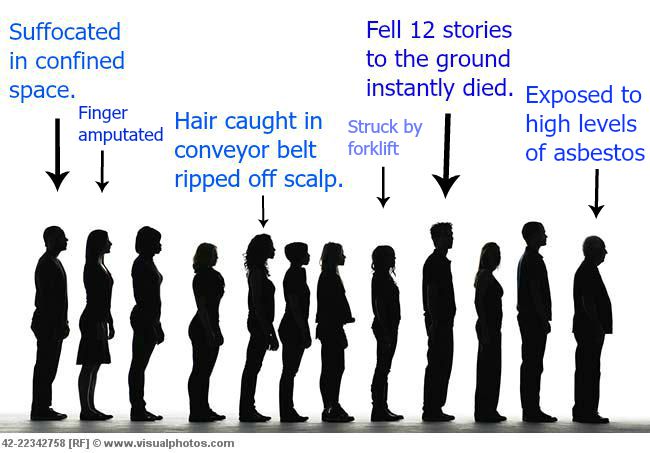 I would have to say that for me, the lowest form of person is someone who takes advantage of other people.  What could only make it worse is someone who takes advantage of migrant workers and intimidates them like a school yard bully into performing unsafe acts, putting their lives in danger.  What? But Phil this is 2015, that doesn’t happen here anymore. I wish I could say that is true but as you’ll read in the first story a unscrupulous business owner took advantage of a visa program to find desperate workers who are only trying to feed their struggling families and keep a roof over their head while the owner collected the profits and couldn’t care less what happened to them as he knowingly exposed them to a future of cancers and other lung disease.  They came here to work so they could take care of their families but now they may become burdens as they slowly wither and die. A clue to the commitment by the owner of any company you work for is the training given.  Especially for those of you that work with chemicals and other hazardous liquids, you should be trained to know what you are working with and how to expect it to react under various conditions. What are the things not to do with it and, how to ensure proper containment to prevent disaster.  What gear and PPE is needed to protect you from injury. Don’t hesitate to ask questions, there a no stupid questions related to safety.  If there is no training at all call OSHA and file a complaint 1-800-321-OSHA (6742). As of July 11, 2015 – 979 people had died in industrial accidents. That’s an average of 5 people a day.  The good news in it’s down from last year at the same time when 1021 people died and that’s a 4% drop but higher then 2013 when 882 died.  Stay vigilant and never keep quiet about safety.  Well that my friends unfortunately sounds like another episode of Companies Behaving Badly.

OSHA: Illinois company exposed Mexican workers to asbestos – PREVENTABLE – I find it down right despicable and disgusting when a business owner takes advantage of any worker who is trying to feed their family while working an honest job in a foreign country.  That is exactly what Joseph Kehrer, Kehrer Brothers Construction and a Kehrer affiliated company, D7 Roofing did as they brought in Mexican workers and then had no problem directly exposing them to asbestos without giving any warnings of the existing hazard or the appropriate PPE. Their total lack of respect for these workers and total disregard for their well being earned Kehrer a $1.8 million fine.  Workers were also threatened with termination if they spoke to investigators as Kehrer took advantage of a special visa program that allows companies to hire foreign workers temporarily.  This company should be expelled from this program, pay the fine, which is to low in my opinion and put management on trial for their crimes against humanity.

Columbus cabinet factory faces OSHA fines after death – PREVENTABLE – Thomas Hegg enjoyed teaching his son about hunting and also sharing the wonders of the outdoors.  He was a husband, father, grandfather and the 55 year old’s lungs had been filling with wood dust during the 15 years he worked at Oak Creations. His body finally succumbed and he died on January 13th.  The inspection that followed found 21 safety violations that put workers at risk for respiratory hazards, fire, explosion and amputation and earned Oak Creations a proposed fine of only $50,000. This death could have been prevented if the company had issued and insisted that workers wear respiratory gear when working in areas of high dust levels.  Whether you see it floating in the air or not and no matter what kind of dust it is, every time you take a breath it’s going into your lungs and over time the damage can become too much for your respiratory or circulatory system to handle.  Wear your PPE and protect yourself.  You may not see immediate health issues but over time, 10-20 years later it can rear it’s ugly head.

Two years in prison for officials in Milpitas construction death – PREVENTABLE – Since CalOSHA can’t do it, some cities and counties are picking up the slack and are now prosecuting the owners of companies that murder their employees.  One recent case is in Milpitas, California where Raul Zapata, a 39 year old employee of U.S.-Sino Investment Inc. was working when a 13 foot retaining wall collapsed on him burying him under several thousand pounds of dirt and concrete. The city had issued a stop work order 3 days before the accident due to concerns for safety and they didn’t have an excavation permit.  Because of the unstable conditions his body couldn’t be retrieved for 2 days. CalOSHA had issued 14 citations and a proposed fine of $168,000 after their investigation.  The owner Richard Liu and project manager Dan Luo were convicted of involuntary manslaughter and later sentenced to 2 years in state prison. They knew of the hazard and didn’t care who might be injured or killed and now they’ll sit in a jail cell to think about it for 2 years.  This should become the new norm for any business owner who is found willful in the death of any employee.

OSHA cites tannery for 19 violations after worker killed – PREVENTABLE – Juan Gonzalez a 59 year old maintenance worker had no idea that this was going to be his last day alive as he was inspecting a bearing on a hide-fleshing machine but since LOTO was not practiced at D.R. Diedrich & Co. Ltd the 1500 pound roller suddenly moved and struck Juan in the head and died.  The investigation that followed found 1 Willful and 18 other safety violations and was fined a proposed fine of $169,000 for not using LOTO, lack of machine guards and inadequate training of workers.  This was the second death there in 6 years and they were cited for a similar LOTO violation in 2011. There is no excuse to put your life or limb in jeopardy, make LOTO a consistent practice.

OSHA proposes $63K in penalties for Pleasant Prairie company accused of disabling machine safety devices – PREVENTABLE – Yet another despicable company with total disregard for the safety of their workers.  Some idiot at Warren Industries had the bright idea, to increase production by bypassing the safety guards and interlocks on the packaging equipment which only exposed workers to un-necessary hazards such as lacerations, fractures and amputation but hey, the lines keep going and try not to get your blood on that.  For this brainiac move they earned 1 Willful violation and a proposed fine of only $63,000. OSHA initiated the inspection based on a former employee complaint and now you understand why.  If anyone tampers with the safety guards or cut-offs on any piece of machinery, notify management immediately. If management does nothing then call OSHA,1-800-321-OSHA (6742).

OSHA cites Dothan’s Twitchell Products for second time, proposes $57K in penalties – PREVENTABLE – Twitchell Products LLC was inspected by OSHA and issued 2 Repeat and 2 Serious safety violations and a proposed fine of $57,013.  Apparently the brain trust at Twitchell thinks it is o.k. to expose workers to amputations, burns and falls and didn’t get the message the first time as exposing workers to amputations and lack of guarding are repeat violations.  They also exposed employees to fire and explosions from improperly stored oxygen and fuel cylinders.  In other words their safety program is based purely on luck and management here is not that stupid they just don’t want to pay for a safety program and would rather pocket the money.

OSHA cites Alabama fireworks facility for safety violations after deadly explosion – PREVENTABLE – Marie Sanderson, 51 and Aimee Cothran, 43 both died from injuries received in a blast and 2 others suffered serious injuries while working at Ultratec Special Effects a fireworks manufacturer.  What OSHA found was that Ultratec failed to provide a safe environment for employees working with highly explosive materials and neglected its responsibility to protect workers by failing to address safety hazards in its manufacturing process. This resulted in 13 Serious and 1 other than serious safety violations along with a proposed fine of $66,221 and two families are left dealing with the aftermath as they try to put the pieces of their lives back together again because the company couldn’t be bothered with reviewing it’s process and improving safety procedures.  Safety is not a one time thing and you need to review your procedures and processes as well as training at least once a year.

Dockworker had been drinking prior to fatal port accident, sources say – PREVENTABLE – Judy Jones, a 49 year old dock worker had survived working in a very male dominated environment for 18 years and regularly worked for APM Port Elizabath terminal.  She also trusted that her employer would maintain a safe work environment for her to operate in but that was all shattered when a top loader driven by a fellow employee struck her, severed her leg and she then bled to death on the dock she worked.  The person driving the top loader who was also a ILA union member and from unconfirmed sources he may have been drinking before the accident.  Jones is also the second woman worker to die on the docks as Earline Brundage, 47 was pinned between 2 shipping containers.  The docks can be a very dangerous place and there is NO room for being impaired on the job by either drinking or taking drugs on the job.  When operating machinery and moving equipment in a crowded area where people are also moving about you need to have your full undivided attention and all senses working.  If true, the driver of the loader will have to live with this for the rest of his life. If you see a fellow worker taking a drink or doing drugs and then goes to operate machinery and you say nothing, you are possibly aiding and abating in your own death.

Stanlow Refinery wins safety award – WINNER –Essar Oil UK has won the Gold Award for 2015 and the Order of Distinction for 19 consecutive Gold Awards for the Ellesmere Port site. It can be done.

That brings yet another episode of Companies Behaving Badly to a close.  Thanks for stopping by and spending some time visiting our archives, it’s greatly appreciated.  Please let me know if there are any safety topics you’d like to see coverage  and as always don’t hesitate to use any or all of these stories at your next safety tailgate/toolbox meeting.  Remember that safety is a continuous process and you are part of that process.  Never keep quiet about safety and get involved with the safety committee or program at your place of work.  Always watch your partner’s back and always be aware of your surroundings. Your employer should be giving at least a monthly safety meeting and refresher training when new equipment is installed or old equipment refitted.  If not ask why?  If you feel endangered at work or are pressured by management or other workers to commit unsafe acts or are refused PPE call OSHA.  It’s anonymous.1-800-321-OSHA (6742). Si se siente en peligro de extincion en el trabajo o son presionados por la administracion u ostro trabajadores a cometer actos inseguros o esta negaste PPE llamada OSHA.  En anonimo. 1-800-321-OSHA (6742).

Until next month, stay safe my friends. 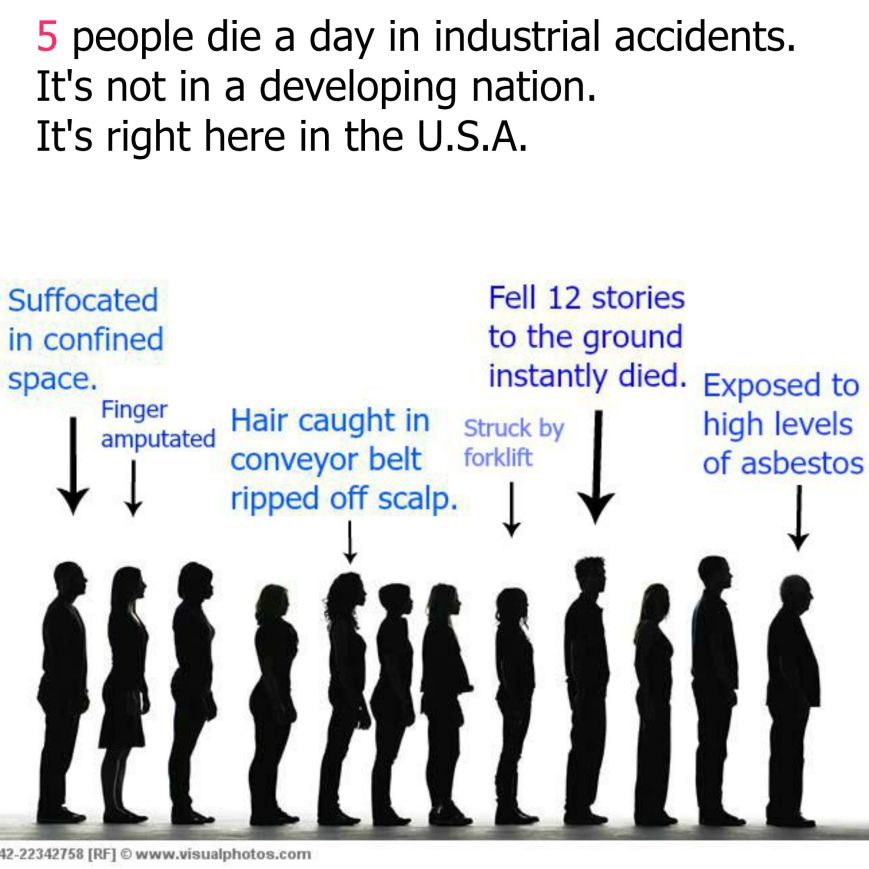